A Master Teacher has passed Our Way 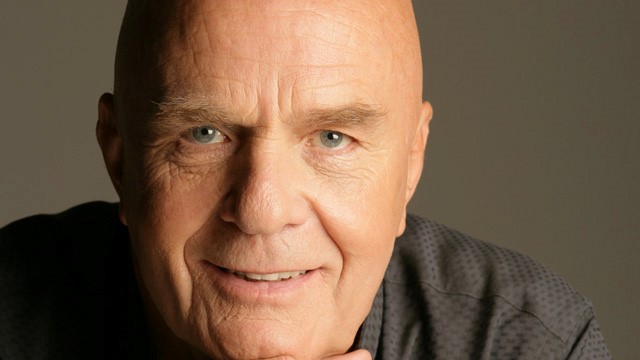 Wayne W Dyer’s soul parted ways with his body on August 30, 2015.  And although his body has been spread on the beautiful Pacific Ocean off the coast of Hawaii, he will always be with us.  Other than my family and parents no other individual has had such a positive impact on my life.

I began reading and listening to Wayne Dyer in the early 1980s and his impact on my life was immediate, profound, and positive.  He has a keen sense of humor and the ability to take complex thoughts and make them both understandable and easy to implement.  His teachings were beyond debate.  They just made sense and their innate truth sank deep into my heart. His early books and lectures were centered on being responsible for my life.  Realizing that my life is and always has been a reflection of my choices.  The circumstances of my life do not reflect victimhood…..they reveal who I am.  I will always attract into my life what I am.  If I am loving, gentle, forgiving and kind, that is exactly what I will attract.  On the other hand if I am angry, bitter, resentful, and unforgiving…..that is exactly what I will attract.

His writings and lectures were peppered with quotes from Jesus, Rumi, John Keats, Rudyard Kipling, Lao-Tzu, Michelangelo, and many more.  His love of poetry was immense and appeared in his lectures and writings at just the right moment to capture his message.

He was not caught up in his own self-image, but laughed at himself and taught me not to take myself too seriously.  And whenever he found someone whom he felt had a great message to offer, he introduced me to them.  He was not about hogging the spotlight.  He introduced me to so many other great teachers whom I have grown to love.

As his writing progressed he became very spiritual.  Teaching concepts of Highest Self, We Are One, Unconditional Love, Gratitude and Generosity, Forgiveness, being in the Present Moment and Meditation. He said his greatest teacher was his father.  A man who left Wayne, his two brothers and his mother when Wayne was just a baby.  He never knew his father, but was filled with rage about how a father could leave his family without any support.  He wondered how he could be so abusive to everyone who knew him.  He was a drunkard, a womanizer and a man who didn’t even attend his own mother’s funeral.

Because Wayne’s mother did not have the means to support her children, they were placed in foster homes and an orphanage until she was able to care for them. This situation brought out the desire in Wayne to help other children in the orphanage to learn to be self-sufficient.  He helped the new orphans adapt to their environment and found the fun and the positive solutions to their problems.

Wayne was very successful academically.  He became a professor and wrote several academic books that were very well received.  But he was a troubled man.  He was driven  to find his father so he could confront him and ask him why or how could you leave your family and be so abusive and uncaring about any of us.  Finally on August 30, 1974, through a chain of synchronistic events he found himself standing on his father’s grave in a poppers grave yard.

Wayne vented his emotions, shouting and asking why or how could a man be so vial and uncaring to treat his sweet mother with such disregard.  How could you leave me and my brothers without even looking back or checking to see if we lived or died? How could you treat everyone who knew you with such contempt?  When he finished venting, he got into his car to leave but felt compelled to return.  As he stood the second time on the grave he began to cry.  He finally knew deep in his soul had forgive his father.  He ended his visit with the words: “From this day forward I send only love.” He left that day and began just over a two week marathon writing his first book, YOUR ERRONEOUS ZONES.  That book became a national best-seller.  And that was just the first of his best-selling book list.  Forgiveness blew the door off Wayne’s potential and freed him to be all that he was meant to be.  Today millions of people around the world are taught and inspired by his many writings translated into hundreds of languages.

His example of forgiveness showed me that nothing can ever happen to me for which I cannot forgive.  Forgiveness opens the door to happiness.  Many people come into my life….all come on purpose.  Each has something to give me.  How I accept it is up to me.  And my life will reflect my choice.

One of my favorite stories Wayne love to tell was the story of the cookie thief:

A woman was waiting at the airport one night,

With several hours before her flight.

She hunted for a book at the airport shop,

Bought a bag of cookies and found a place to drop.

She was engrossed in her book, but happened to see,

That the man beside her, as bold as could be,

Grabbed a cookie or two from the bag between,

Which she tried to ignore to avoid a scene.

She was getting more irritated as the minutes ticked by,

Thinking ‘If I weren’t so nice, I’d blacken his eye!”

With each cookie she took, he took one or two,

When only one was left, she wondered what he’d do.

With a smile on his face and a nervous laugh,

He took the last cookie and broke it in half.

He offered her half, and he ate the other.

She snatched it from him and thought,

“Oh brother, this guy has some nerve and he’s also so rude,

Why he didn’t even show any gratitude.”

She had never known when she had been so galled,

And sighed with relief when her flight was called.

She gathered her belongings and headed for the gate,

Refusing to look at the “thieving ingrate.”

She boarded the plane and sank in her seat.

Then sought her book which was almost complete.

As she reached in her baggage, she gasped with surprise,

There was her bag of cookies in front of her eyes.

“If mine are here” she moaned with despair,

“Then the others were his and he tried to share.”

Too late to apologize, she realized with grief,

That she was the rude one, the ingrate, the thief!

For now, Earlynn’s just sayin’:  “How many times have we judged another only to find we have totally misunderstood the situation.  In all cases, let us love one another.”

Order your own copy of Earlynn’s book, Transformed.  Just click the above tab entitled

Earlynns’ Book to order your own copy today.  Thank you.  Namaste!

Earlynn is a spunky mother, grandmother and yes, even a great grandmother. I have always been drawn to things spiritual from the time I was very young. Over the years I have read, studied and prayed that God would use me to bring comfort to troubled minds. That is my purpose more than anything else, but along the way I have also lived a very happy life. I love my family....5 children, 5 inlaws, 18 grandkids and four great grandkids. I am a master cake decorator, I love gardening, I am passionate about health and nutrition. I love parties and gatherings of family and friends. I love cooking and at least twice each year I host dinner for 50. I love writing, teaching and public speaking. I love my sweetheart. We met when we were only 10 years old and will soon celebrate our 50th anniversary. Everything I do is centered on my spiritual beliefs and I know love is the answer to all of life's problems. Join me on my web site as we explore many ideas, laugh a little and love a lot.
View all posts by Earlynn →
This entry was posted in Spirituality and tagged A master teacher, forgiveness is the ket, Wayne W Dyer, Your life is a reflection of you. Bookmark the permalink.