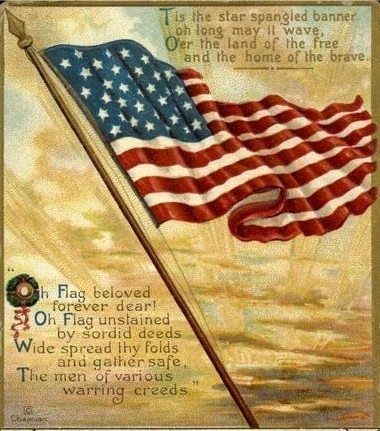 Yesterday as  the opening ceremonies began for Super Bowl XLVIII, I watched and listened to an inspiring rendition of The Star Spangeled Banner sung by a truly gifted opera star, Renee Fleming.  She sang the anthem with the conviction of a patriot.  Many times we hear someone sing the anthem as a memorized script, but Renee Fleming sang it with true emotion that brought tears of pride.

Her performance made me think of the meaning in those words and why that song is our National Anthem.  The lyrics were penned by Francis Scott Key, an attorney from Georgetown.  It was written about the Brittish Shelling of Fort McHenry in preparation to demolish Baltimore during the war of 1812.  The colonies were in a protracted war with the Brittish.  Francis Scott Key was sent by the colonies to negotiate a prisoner exchange.  Many American prisoners were being held in chains and filthy conditions in the cargo holds of Brittish ships about 1,000 feet off shore.  Francis Scott Key was delighted to have reached a settlement for a one to one prisoner exchange.  He was allowed to go below to give the good news to the prisoners.

As he returned to the top deck he was informed that there was a slight problem.  The Brittish Admiral said that they would definitely honor the negotiated exchange, but the release would be merely academic after tonight because the war would be over after tonight.  The Brittish war fleet would arrive in a couple of hours with orders  to shell Fort McHenry……to totally wipe it off the face of the earth.    Francis Scott Key told the Admiral that Fort McHenry was not primarily a military fort, but was full of women and children.  The Admiral told him not to worry because the Brittish have left a way out for Fort McHenry.  All they need to do is lower the flag which was visible above the rampart and the shelling would cease immediately.  The Brittish would accept their surrender and Fort Mc Henry would then be under Brittish rule and the prisoners would be released.

Francis Scott Key went down below and told the men what was about to happen.  “How many ships?”, the men asked.  “Hundreds”, was  Key’s response.  He promised the men he would watch the shelling from the deck and would shout down to the men as he watched.  As twilight began to fall the haze hung over the ocean as it does at sunset, when suddenly the Brittish war ships unleashed.  The sound was deafening and it was impossible to talk or hear anything else.  The sky, although dark was suddenly lit by explosions.  From down below, he could hear the men…..”Tell us where the flag is.”….”What have they done with the flag?”…..”Is the flag still flying over the rampart?”….”Tell us…..”

As time passed, 1 hour, 2 hours, 3 hours, everytime a bomb would explode close to the flag, he could see the flag illuminated in the red glare and Key would shout to the men…..”It’s still up!”  The Brittish Admiral querried, “What’s the matter with them….don’t they know this is an impossible situation?”  Key’s response was a quote from General George Washington; “The thing that sets the American Christian apart from all other people in the world is he would rather die on his feet before he’ll live on his knees.”

Brittish reconneaissance reported the flag had been hit directly again and again, yet it was still flying.  The shelling continued unmercifully.  Key could hear the men below praying; “God, keep that flag flying where we last saw it.”    As sunrise came there was a heavy mist hanging over the land.  The rampart stood tall and there hung the flag in shreds.  The flagpole itself was at a crazy angle, but the nondescript shredded flag was still at the top.

Key rushed to Fort McHenry to see what had happened.  That flag and flagpole had suffered repetitious direct hits.  And when it had fallen, men and fathers who knew what it meant for that flag to be on the ground walked over and held it up until they died.  Their bodies were removed and others took their place.  What held that flagpole in place at that unusual angle were patriot’s bodies.  The debt was demanded…..The price was paid.  Francis Scott Key sat down and wrote these words:

“Oh, say can you see by the dawn’s early light,

What so proudly we hailed at the twilight’s last gleaming.

Whose broad stripes and bright stars through the perilous fight,

And the rockets red glare, the bombs bursting in air,

Gave proof through the night that our flag was still there.

Oh, say does that star spangeled banner yet wave,

O’re the land of the free and the home of the brave.” 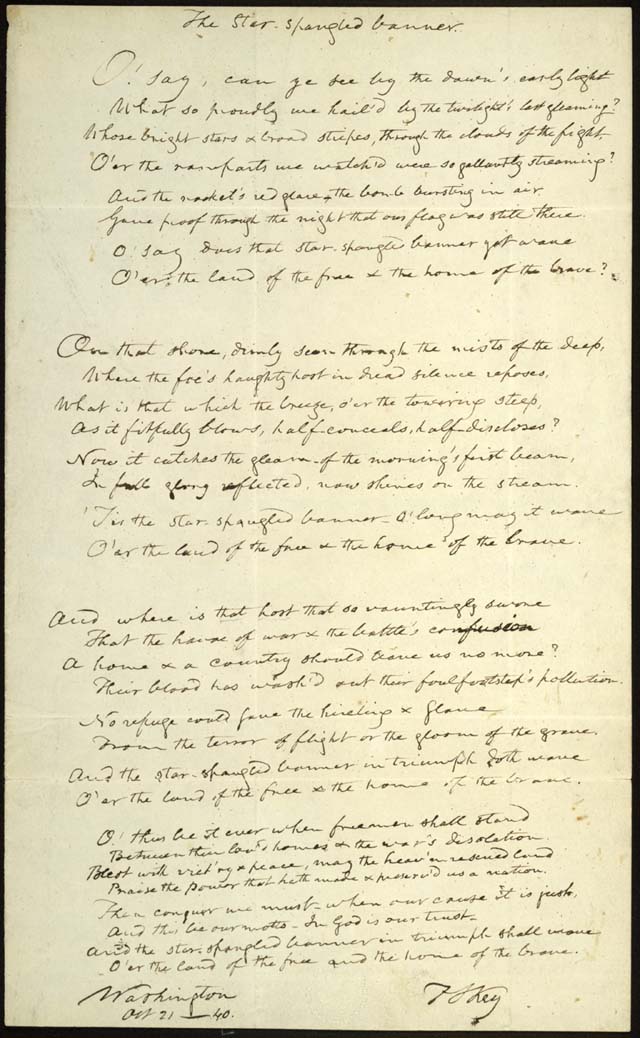 For now, Earlynn’s just sayin’:  “Let us never forget the price paid for our freedom.  Everytime we hear our National Anthem, let us say a prayer of thanks for the patriots who made the ‘American Way’ possible.”

Below is a link to hear a beautiful rendition of the Star Spangeled banner by Whitney Houston.

Earlynn is a spunky mother, grandmother and yes, even a great grandmother. I have always been drawn to things spiritual from the time I was very young. Over the years I have read, studied and prayed that God would use me to bring comfort to troubled minds. That is my purpose more than anything else, but along the way I have also lived a very happy life. I love my family....5 children, 5 inlaws, 18 grandkids and four great grandkids. I am a master cake decorator, I love gardening, I am passionate about health and nutrition. I love parties and gatherings of family and friends. I love cooking and at least twice each year I host dinner for 50. I love writing, teaching and public speaking. I love my sweetheart. We met when we were only 10 years old and will soon celebrate our 50th anniversary. Everything I do is centered on my spiritual beliefs and I know love is the answer to all of life's problems. Join me on my web site as we explore many ideas, laugh a little and love a lot.
View all posts by Earlynn →
This entry was posted in History, History Tells Us, Spirituality and tagged An anthem for patriots, Francis Scott Key - American patriot, Freedom comes at a price. Bookmark the permalink.

7 Responses to A Truly Inspiring Anthem