What is Truth? Part 2 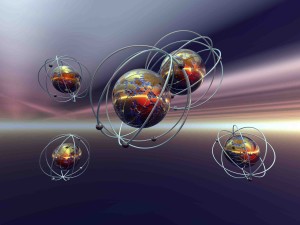 In my last blog, I listed five old scientific truths which have now become assumptions that have been proven to be false.  As I understand the scientific premise, a true scientist will always examine the facts relating to an hypothesis.  A true scientist does not try to prove anything is right or wrong, because the scientist wants to discover the truth.   So, when an old truth is shown to be false, a true scientist embraces the new truth.  In so doing the way is opened for even newer truths to emege.  With this premise in mind it is difficult to understnd the reluctance of mainstream science to embrace the new truth.  It is very frustrating that these new truths are not being taught in our schools.  The five scientific assumptions which have now been proven false are:

#2 – Advanced civilization on earth is 5,000 years old, is linear and has happened only once.

#3 – Consciousness is seperate from our physical world.

#4 – Everything is empty between you and me and the only thing that matters is matter.

#5 – Nature is based on survival of the strongest.

Our schools teach that the oldest advanced civiliazations on earth date back 5,000 years.  The truth is archeologists are uncovering advanced sites much older than that.  It is now believed that the advanced astrology, architecture, agriculture and mathmetics of the Myans was passed on by civilizations which ended in the prior World Age.

The oldest site discovered in America is Caral in Northern Peru. It is believed to be 7,000 years old but ended about 5,000 years ago.  This huge site has five pyramids and had advanced knowledge of astronomy, mathematics, architechture and agriculture.  The site shows no evidence of weaponry or warfare.  It has no protective walls or motes and shows no signs of needing to protect itself.   There are no mass graves or mutilated skeletons.  These findings have been published in peer reviewed archeological journals, but since the information does not fit the model being taught, they are dismissed as anomalies.  This might be acceptable if the anomalies were rare, but that it not the case.  When there are many “anomalies”…..they can no longer be anomalies.

So far the oldest site found is Gobekli Tepe, Turkey.  The site has been fully documented by the Smithsonian Institution and is thought to be between 11,370 to 11,560 years old.   This incredible site has fifteen to twenty circular ceremonial sites which can be seen by infared cameras.  Only about four of these ceremonial sites have been unearthed so far.  For a yet unknown reason, the site was intentionally burried about 8,000 years ago keeping the site very well preserved.  The Smithsonian has many beautiful pictures of the site.  You will find a link to the Smithsonian’s web site with information about Gobekli Tepe below my blog.  Take time to visit the web site.  You will find it fascinating.

Off the coast of India is a site five miles long and two miles wide under 120 feet of water.  Other sites are being found in areas affected by rising sea levels after 4,000 years of storms ended the last Ice Age about 12,000 tears ago.

Evidence of these sites has been peer reviewed and published, yet mainstream science and our schools are not teaching this history.  What is currently being taught is the history of the most recent 5000 year World Age which ended in December, 2012.  Advanced civilizations did exist prior to this past 5,000 year World Age.  And they existed during the 5,000 year World Age prior to that.  So, we can say that Scientific Assumption #2 is no longer a truth.

It is said;  “Life’s longest journey is 18 inches,” (the distance from the center of the thinking mind to the intellegence found in our hearts).  Science is now beginning to study and understand the connection of our hearts to our physical world.  The world is filled with vibrating electrical and magnetic fields.  Quantum physics shows there is no empty space.   Doesn’t it make sense that we must learn to communicate with these fields?  When you and I were in school we were taught that our brain and thinking was the most important factor in achieving a successful life.  But do you know that your heart has an electrical field 100 times stronger than your brain?  And do you know your heart has a magnetic field that is 1,000 times stronger than your brain?  This is why it is so difficult to think our way out of so many of life’s problems both personal and social.  Eastern cultures, native indians and aborigines have recognized the power of their hearts to guide them to live successfully.  The heart is the first organ to form in our bodies.  It forms before our brain.  And hearts are designed to “feel” our way.  The incredible power of the human heart was shown undeniably to the scientific community on 9-11-2001.

Geostationary Operational Environmental Satellites (GOES) orbit the earth at about 23,000 miles above earth.  They relay vital informtion about the strength of earth’s magnetic field every thirty minutes 24/7.  On September 11, 2001, the GOES – 8, and the GOES – 10, each relayed a powerful spike in the magnetic field strength at about 9:00 A.M. EST.  This was about fifteen minutes after the first plane hit the World Trade Center and about fifteen minutes before the second plane hit the tower.  The timing of the spikes  were so simultaneous that it could not be denied they were related to those despicable acts of terrorism.  The question that begged to be answered was how were these spikes related to these acts of terrorism.  It took Princeton University and the Institute of Heart Math to find the correlation.  As they studied the GOES transmissions, they found there had been several similar spikes although not as strong that happened previously at times such as the death of Princess Dianna.

These spikes led to studies proving the incredible power of human hearts to affect the world around us.  Gregg Braden in his book, Fractal Time  states; “Specifically, it’s the heart-based emotion of the world’s population that results from such events that seems to be influencing the magnetic fields of the earth.  What makes this discovery so significant is that those fields are now linked to everything from the stability of the clilmate to peace between nations.”

This information spawned The Global Coherence Initiative.  Coherent hearts  resonate at 1.03 Hz which correlates with earth’s magnetic field.  It is believed when many of us focus simultaneously on peace, love and harmony with coherent hearts, we can affect earth’s magnetic fields and enhance the well being of all.  It is interesting to note that you cannot think your heart into coherence.  You must feel your heart into coherence which is something we in the Western world are not used to doing.  A small hand held instrument, the emWave, can detect when your heart is in coherence.  After you feel your coherent heart,  you can feel your heart into coherence again and again.  For more information about the Institute of Heart Math, go to www.heartmath.org.  You can connect with the Global Coherence Initiative at www.globalcoherence.com.

Science knows advanced civilizations have existed on earth for at least 12,000 years which is over two times the 5,000 years being taught in our schools.  Science also knows our consciousness is connected to our world and there are no empty spaces.  The world is filled with magnetic and electrical vibrations.  That makes assumptions #2, #3, and #4 false.

As a society we have an obligation to make sure our chldren are given every chance to benefit from the newest scientific truths.  Soon enough our children will be the leaders of our society.  How can we expect them to lead in wisdom if they are handicapped because they have been taught false science.  Galileo was held under house arrest because he said the earth is round.  He lived from 1564 until 1642……we are now in the year 2014.  Honestly, its the same mentality that refuses to accept new truths!  Will we ever learn?

For now, Earlynn’s just sayin’; “Let’s see to it that our children have every advantage science can provide them.  Spirituality and science are melding…..what a great time to live here on earth.”

If you would like a copy of Earlynn’s book, Transformed, just click on the above link, Earlynn’s Book, to order your copy.  Thank you.  Gloria!  In Excelsis Deo!

Earlynn is a spunky mother, grandmother and yes, even a great grandmother. I have always been drawn to things spiritual from the time I was very young. Over the years I have read, studied and prayed that God would use me to bring comfort to troubled minds. That is my purpose more than anything else, but along the way I have also lived a very happy life. I love my family....5 children, 5 inlaws, 18 grandkids and four great grandkids. I am a master cake decorator, I love gardening, I am passionate about health and nutrition. I love parties and gatherings of family and friends. I love cooking and at least twice each year I host dinner for 50. I love writing, teaching and public speaking. I love my sweetheart. We met when we were only 10 years old and will soon celebrate our 50th anniversary. Everything I do is centered on my spiritual beliefs and I know love is the answer to all of life's problems. Join me on my web site as we explore many ideas, laugh a little and love a lot.
View all posts by Earlynn →
This entry was posted in History Tells Us, Spirituality, What Science Tells Us and tagged Schools should teach truths ., When is a truth no longer a truth?. Bookmark the permalink.

4 Responses to What is Truth? Part 2